Those evil capitalists and their gains

Conventional media as well as bloggers and other net sources are full of lamentation about how the income inequality is growing, as a few rich people get capital gains (which grow) and those of us who need to make our living by working get less and less in wages and salaries (as they don't keep up with inflation). This message gets repeated over and over again. Examples in Finnish, in random order: Demari (2011), Kansan uutiset (2004), University of Tampere (2012), Taloussanomat (2002), Society for the Study of the Juche Idea (2010). People actually believe this, it's the standard narrative.

Now, how does this show up in statistics? The Cabinet Office has got numbers from Statistics Finland and the picture looks like this: 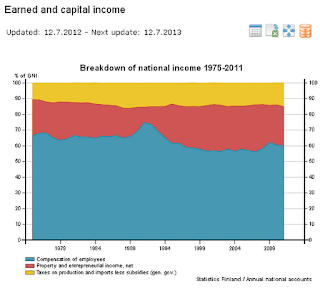 What do we see here? Over a period of 35 years between 1975 and 2010, the compensation of employees as a proportion of national income has fallen from about 65 % to about 60 %. Why? Because the proportion of taxes on production and imports has gone up by about 5 percentage points, from 10 % to 15%. The proportion of income from property and entrepreneurial income is about the same.

Of course, if we decide to cherry-pick our reference point and make it 1992 - and intentionally forget the immediately preceeding history - then we get a different picture. This is what many, many commentators do, particularly now, in 2012, which is 20 years after the biggest recession in our history.

1992 was the year of economic collapse, huge hardship for companies and public sector, and start of rapidly increasing unemployment due to a wave of crashes and bankrupcies. For a moment, employee compensation as a proportion of national income went up rapidly - simply because wages and salaries are less flexible than profits and capital gains. But what you don't see in the picture is that as the share of employee compensation went up strongly, the actual total compensation fell off a cliff, as did the tax revenue. You can conveniently see this in the number of people who needed/got social assistance: 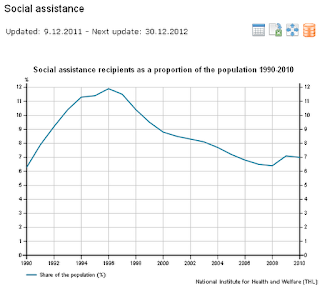 Big surprise. You have a wave of companies making losses. Capital income plummeted first. Then came the bankrupcies and the amount of wages and salaries plummeted as well, because employment plummeted. And then people were poorer.

Wasn't that nice time? Don't we all - except the few evil capitalists - enjoy it if the proportion of employee compensation grows? No. I can tell you that 1992 wasn't a very good time for anyone, and the fact that employee compensation as a proportion of national income was growing did not give jobs or prosperity for the many of us who went through the uncertainty and economic hardship - and for the fewer, many of them failed entrepreneurs, who crashed completely and never recovered.

The breakdown of national income above shows that after 1993, the proportion of capital and entrepreneurial income went up. This was, in part, due to a capital gains tax reform which essentially cut the tax percentage dramatically, but at the same time removed lots of deductions that companies had been eligible to get. It removed tax loopholes and encouraged companies to declare profits, pay dividends, and be taxed.

What you don't, again, see in the above picture is that total amount of tax revenue went up dramatically. You can see it below. 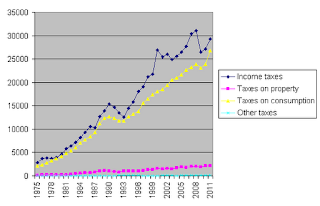 Now, in 2011, we again can witness a phase where proportion of employee compensation goes up - and both total income and total tax revenue drop. Is this fun? No. The government is going hugely to debt.

The discussion seems to boil down to a point: is it better to have a smaller cake, as long as the majority of people - particularly those who were not involved in the baking process - get a larger proportion of it? Even if the total size of the slice they get is smaller? Is it important to "send messages" by having high nominal tax rates, and complex tax law with loopholes and special-interest-group deductions and subsidies, and live with a lower total tax revenue, as long as taxes are high in proportion to income?

And we should realise that employee compensation as proportion of national income is now at the same level as it was in the 1970's, the golden days of Urho Kekkonen and the welfare state as the baby-boomers wanted it to be.